By the time you read this all of the silage will be cut and baled and stacked ready for next winters feed. The early cut was a bit low on volume due to the dry start to the season but the main later cut has been good with decent volumes and nutrient levels. We had decent weather during cutting as well which means we can get the crop cut, spread, wilted, re-rowed and baled within two to three days. This helps preserve the nutrient levels and therefore the feed quality for the coming winter. If you have seen any of the purple wrapped bales around anywhere – they’re part of a charity fundraiser for a local agricultural supplier (Carrs Billington) – certainly eye-catching. I’m afraid ours are just boring green as we had quite a supply of wrap left from last year to use up. The machinery played ball most of the time as well with only a few minor stoppages for mechanical stuff. Most of the newer kit has that many sensors and alarms that we are generally warned well in advance if something is starting to go wrong so that’s usually a help. However, all it takes is one big rock or branch to make a mess of your day as it lunches it way through the mechanics. Obviously, this never happens to us though – only other people!!

Things will start getting busier from mid July on as we start to move into harvest – we should be onto the early barley during the last week of the month if the weather holds and continue on all through August. The crops are generally looking well although some more rain earlier in the season might have given us higher yields. However, the pest and disease levels have been better than normal for us this year so that has helped. The combine will have had a good check over before heading out – hopefully we will spot anything amiss before we get a breakdown in the field. The first few times around the field are always a bit anxious and every funny noise or vibration gets the drivers imagination going. The first unload on the move is always a laugh as well – it always takes me a couple of loads to get the speed matched properly to the combine so you avoid grain spilling over the edge of the trailer. 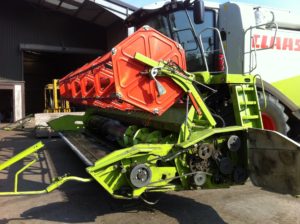 After the barley we will get onto the oilseed rape – we have a lower acreage of this than normal so that shouldn’t take too long. Depending on the weather we hope to get away with the minimum of crop drying this year – we need to get the moisture levels down below a critical level if we want to store grain for feeding over the winter. Obviously the more this is done by the nice free sunshine, the less we have to do through the expensive drier.
Once we get into the wheat then it gets busier as we will also be starting to prepare ground for the next crop. We’ll take this opportunity to spread some of the manure stacks on the stubble fields as well – extra fertility and organic matter into the spoil produced by the housed cattle and pigs during the winter. By doing this and using grass and oilseed rape as break crops in the rotation we aim to keep the soil in good health.

The cattle become less time consuming during the summer as they are all out at grass. Obviously, they all have to be checked a couple of times a day along with water troughs, any feeders etc but generally they just get their heads down and get on with the business of grazing and putting on weight. The pigs like the warmer weather as well – we let the muck passages get a bit wetter than normal so that they can roll about a bit and cool off if they want. Their shed is well sited though and the boarding on the sides is designed to direct the air through the building so it never really gets too hot. 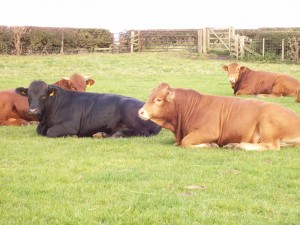