Down on the Farm – August/September

For as long as I can remember we have always started cutting our winter barley in July – not this year. The combine finally got started on the 3rd August after rain stopped play in the second half of July. Fortunately all the crops still seem to be standing up well – sometimes a heavy crop will go flat as the wind and rain causes the stalks to break. This makes it harder to cut, slows the combine down and can also reduce the yield if the grains start to drop out of the heads. Even though it has been wet, the moisture content of the grain is still good – the first few loads were around 15% which means they only need a small amount of drying to bring it down to a safe level of 13-14% for storage. The moisture levels across the crop will vary though as we go through harvest,, depending on the variety, ripeness and rainfall. Obviously we try to avoid using the on-farm dryer as much as possible as it is expensive to run and is also another job to add to the list. 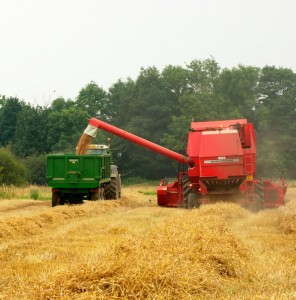 Nice sunny harvest weather is also important for straw quality. We bale all of our straw (the stalks left after the grain has been stripped off) for bedding the cattle and pigs during the winter. This is baled into huge 1 tonne rectangular bales and if the straw is too wet then it can spoil after the bales are stacked. Heat builds up inside the tightly compressed bales and creates moulds – although very rare, it has been known for the heat to increase so much that the bales will smoulder and go on fire. We try to save the barley straw for the pigs as it is softer and more absorbent than the wheat straw – the cattle don’t seem to mind as much. Although the pigs are “monogastrics” (one stomach, like us) and eat a cereal based diet, it’s amazing how much straw they will chew through as they forage about if the quality is good.

After barley, the oilseed rape will be next to do followed by the winter wheat. We have a couple of spring sown barley fields as well which will be last to be ready. The start of harvest is always relatively calm – as we progress we need to bale and stack straw, start cultivating ground for re-sowing, then sowing next years winter crops. When all of these start to happen at the same time it gets a bit frantic. This is also the opportunity for us to spread some of the manure from the stock that was housed over the winter back onto the arable land. This then gets ploughed back into the soil to add fertility and organic matter back and replace the nutrients taken out by the previous crop.

Our lambs have continued to grow well after being weaned – the warm and damp weather has meant we have had plenty of good fresh grass for them to go at. Our challenge is to try and keep the lambs growing at a sensible rate so that we have them available for the farm shop for a long as possible during the year. As well as size, we select the lambs on condition or fat levels – keep them too long and they get too fat and too big. Fortunately, just like humans, there is always a fair variation in growth rates in the flock anyway – our job is to carefully select the ones that are just coming ready each week before they go over-fat. This means getting them in at least every fortnight and feeling over the ribs, spine and tail to see which ones have put on condition. 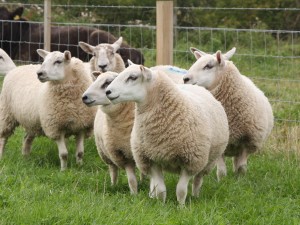 We have been treating them with an anti-fly spray to make sure that we reduce “strike” problems to a minimum. Adult blowflies need to lay their eggs somewhere warm and damp and a nice wool fleece can provide just the right environment. The eggs hatch into larvae and will start to attack the animals skin as they grow – not a pleasant thing and one we work hard to avoid. Compared to the sheep, our pigs are very easy to manage – they rarely suffer from much as long as they are well bedded out, have plenty of feed and water and space to rummage around.

Our new chickens have settled in well at the farm shop – another visit from Mr Fox has meant we have had to fortify the chicken pen and install an automatic door on the coop. A box of tricks senses the light levels – at dusk it closes the door and opens it again as the light increases after dawn. Chickens naturally roost as it gets dark so we have been checking for the first few nights that they were all inside before the door closed – so far so good. They have already started to lay well -spot the pullet egg compared to our standard ones!