You can’t have missed the fact that it’s been a bit dry recently – this has brought us mixed blessings at the farm.  Our first cut of silage was a little light but was great quality.  The heat meant that we were able to cut and wilt the grass quickly and then get it bales pretty much the next day.  This helps to conserve as much of the nutrients as possible which gives good fermentation and so improves feeding quality for the winter.  Unfortunately, the lack of rain has meant that grass re-growth has been poor so we have only been able to make a very small second cut.  Hopefully what we have made will be sufficient to see the cattle through the winter period.  From what we have heard and seen in the media, we are better off than many folk who have already had to start feeding stock with feed destined for this winter.  We have been giving some of the larger cattle a little extra cereal ration just to make sure they keep condition – normally they would be fine with grass only at this time of year. The small amounts of rain we have had has at least given us a bit of growth in the sheep pasture fields so we haven’ had to suppletory feed any sheep yet. 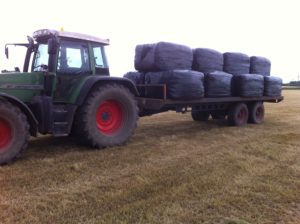 The cereal crops have been doing OK, although yields are probably down a little due to the lack of moisture earlier in the growing period.  There has obviously been no problem finding dry days to get the crop cut through – the barley came in early and we are virtually finished the oilseed rape at the time of writing.  The barley will all be kept for animal feed this year – it gas been treated with an inoculant which allows it to be stored safely without going mouldy.  This will then be rolled and mixed with silage and a vitamin/mineral balancer during the winter.  The straw yield is poor this year – basically the stalks just didn’t grow to their normal length due to the dry conditions.  We have been baling every last bit, including all the rape straw to make sure we have enough bedding for the pigs and cattle.

The wheat crop is looking promising – I think the weeds have also had a tough time in the dry and the crop is very clean so hopefully yields will be good.  Again, the crop is short so we expect the number of bales we get to be lower than normal.  Looks like the straw will be a high price this season then! 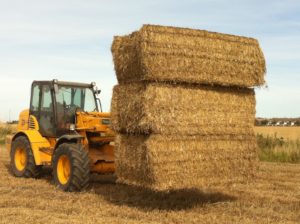 We’ll soon start sowing next years crops, beginning with winter rape.  Hopefully we will get a little bit of rain to soften up the soil before we start discing and drilling with the latest addition to the machinery fleet.  This cultivates the ground and incorporates and stubble, then sows the rape seed before pressing the surface of the soil again to retain moisture and provide a good seedbed for germination.  By doing three processes at once it helps speed things up and also reduces compaction of the ground which helps crop growth.  Its also cheaper as we don’t use as much fuel and labour.  It does take a fairly hefty tractor to pull it though. 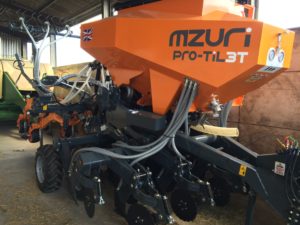 The pigs are doing well – they are perfectly happy with the hot weather as long as they have access to plenty of water and shade.  We have been letting the muck areas stay a bit wetter than normal as well to give them more chance to roll in the muck and cool off.  Otherwise they seem very happy just to snooze the day away, with the occasional trip to the feed trough to top up!