Down on the Farm May & June

The great warm weather at the beginning of May has helped to get everything moving again at the farm. After lambing finishes in April, it’s always good to get some fresh grass growing quickly to keep up with the grazing demands of the ewes and lambs. When the soil temperature rises then the grass can better utilize any fertilizer and nutrients and really start bulking out. It’s always a surprise how fast a squad of hungry ewes and their lambs can lay bare what looked like a nice lush paddock. Early in the season we try to keep them moving around different fields as much as possible to allow the pasture to regrow before it gets eaten down too much. We will shortly be starting to clip the ewes – we need to wait for a few consecutive warmer days as that helps to get the wool to lift and makes it easier for the shearers. As usual we will be getting in a professional to do this for us – my sheep clipping skills are pretty much non-existent – if it was left to me I think we would still be clipping in August. Getting the fleece off early means the ewes are more comfortable when it gets hotter and we reduce the risks of fly strike where eggs are laid on a damp fleece which subsequently develop into maggots and all the problems for the sheep that that causes. The wool we produce is wrapped and stored in huge sacks until it gets collected later in the year.

The cattle are all pretty much back outside again both around the farm and on the Town Moor. The few that are still inside are finishing off what remains of last years silage. Once they are out then we will have a mammoth mucking out session to give us chance to get the building cleaned and rested. All of the manure will then be stacked and will get chance to compost down a bit before we spread it on the arable fields later in the year.
We have just started to roll some fields which will be closed up shortly for silage making in a few weeks time. This will allow the grass time to recover from grazing and to take advantage of the fertilizer we have applied. The grass we sow in these fields is designed to produce a heavier crop and be used fort as part of the crop rotation unlike the fields which we use for permanent grazing which have been down to grass only for years. They will also be rolled with a heavy steel roller to push any stones down into the soil – frost and rain over the winter causes the ground to “heave” which brings stones to the surface – not a good thing when the very expensive blades of the mower hits them at speed. Of course, it’s an unwritten law that this will only happen just as soon as you have installed that nice new set of blades!! Once the grass is long enough, it will be mown, allowed to wilt for a short while and then baled and wrapped in plastic to allow it to ferment and preserve the grass for later. You can see that farming is basically all about a lot of forward planning – we have just let the cattle back out after winter and already we are sorting out their feed for the next winter.

Many of you will know that we buy in our weaner pigs at around 30kg and then grow them on to around 90kg until they are ready for the farm shop. For the last few years we have been sourcing these from Robin who farms in the Borders they have been really great pigs but he has built himself a nice new shed and will now be finishing all of his pigs himself. As we have known about this for several months we have arranged with a local farmer Mathew to produce our weaners for us much closer to home – probably less than 10 miles away. The first batch from him will arrive at the farm in June and will be very similar to what we have already been using, meaning the quality of the pork, bacon, sausages etc will be just as good as before.

The start of spring and summer also changes what goes on at the farm shop. The first few sunny weekends always mean the BBQs get dragged out and fired up so the demand for sausages and burgers shoots up. The kids area has been very busy with the goats getting loads of attention as usual. The new toddler ride-ons have been getting plenty of use. There are several events coming up over the next few months – the next one is our Hog Roast on the 28th May. As usual all the information is on our website or you can sign up for our e-mail newsletter and get updates that way. 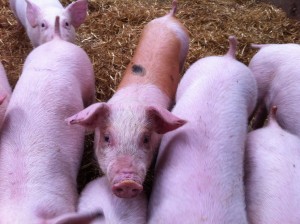 Down on the Farm Feb 2016 Butchery & Kitchen Creations
This site uses cookies: Find out more.